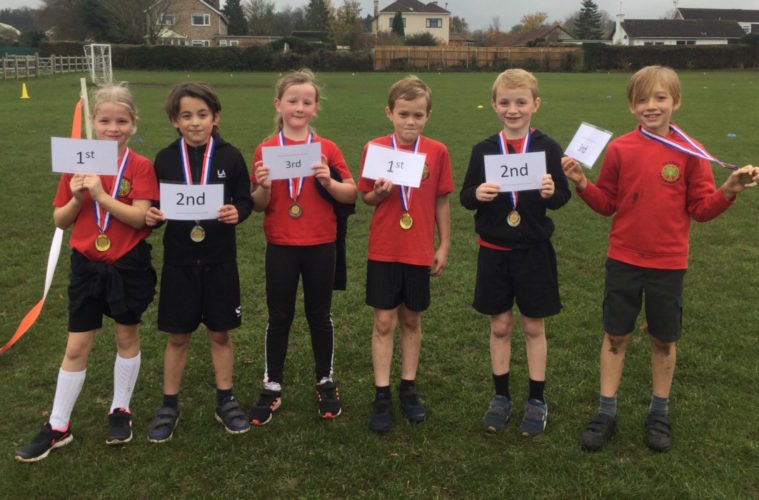 A buzz ran around Saltford Primary School recently following the news that KS2 had been invited to take part in the inaugural inter-school cross country competition.

The day started strongly with the Year 3 bubble (pictured above) setting a high standard of competition. The Year 3 boys all started positively with great determination. Eventually Charlie T broke away from the pack to claim first place, closely followed by Oscar B and Theo W. The Year 3 girls were lead by Clara F from the start who claimed a hard fought win, followed by Robyn H and Esther W.

Next up to compete was the Year 6 bubble. This was fiercely competitive from the start, with the all the boys determined to win a medal. Ewan S sprinted ahead of his peers to take a well deserved first place, repeating this feat from last year. Tobias F followed in second, with Tom H pacing himself well to take the bronze.

The girls then followed suit with another well run race by all, with twins Isla and Darcy W claiming first and second place respectively, with Phoebe L pushing them all the way to the end to take third.

Year 5s were next to take place on the starting line. Yet again they showed us all Saltford grit and determination. Ava D claiming first place, Amelia L hot on her heels in second with Lila O in third. The boys race proved to be hotly contested, ending with a photo finish to determine third place. First place was awarded to William A and second to Seb K, with Jack F narrowly claiming third.

The Year 4s rounded off the morning on a high. Again, a photo finish was required for third place in the boys, with Jack B claiming third, Harry K first and Anslem W second. The girls race was equally competitive with Nicole F claiming first, and Harriet C and Poppy D finishing second and third respectively.

There was great sportsmanship by all involved, which saw some fantastic competitiveness. A big thank you also offered to all helpers who without input, the competition couldn’t take place.